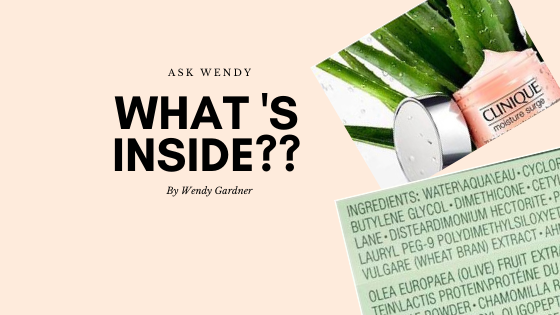 So that’s what today’s post is about…  I’m going to pick a brand you’d have seen at Duty Free (remember those days?!) 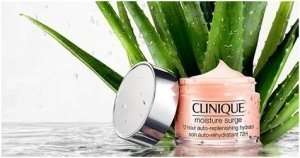 We all use moisturiser, so it’s a good choice for today.

Now look at this photo. See the pretty pink cream snuggled up to a  gorgeous aloe vera plant. Oh yes, you want aloe.

The product name is so enticing too, wow. Great wordplay.

So what’s inside Clinique Moisture Surge then?

Let’s look at what else is inside that pretty pot? How to do that, well let’s look at the ingredients list.

From an official website we find the full ingredients listing:

Where does the aloe appear on the ingredients?

Look for the Latin name of aloe barbadensis. Seems high on the list so it must be choc-a-bloc loaded, right?

It’s listed after Sodium Hyaluronate (aka Hyaluronic Acid  (HA)), an ingredient that always appears near the end of the listing due to its nature. HA is never used in massive amounts in a face cream, as it’s a powerful humectant that helps hold onto 1000x times it’s weight in water so obviously could not appear near the front of the list in a cream.  You could not, for instance, put 1g of HA powder into the recipe.  (Why not?  Try it for yourself and see what happens)

Ok, so now we know that the aloe is used in a tiny amount – probably as a freeze dried powder then rehydrated into water, which is fine.  It’s possible to chop open aloe leaves and remove the gel and then mix that straight into a fresh batch of cream. But logistically a nightmare. If I lived in a sunny climate with aloe in the garden, I would definitely give it a try.

Next we ask, what is the main ingredient?  What’s the main component of this very pretty pink  cream?

Um, well it’s water, tap water.  This range is produced in the tens of thousands of units in under a day. I dont know, maybe they make 500 000 units in a morning. So they’re going to need ingredients available in bulk, with a  long shelf life as they’re going to be sitting on brightly lit shelves in stores with central heating and nobody in the supply chain wants to dump products with a  short shelf life.  So that explains lots of the components that are synthetics. (These also bring manufacturing costs down. Naturals are a pain in the rear for large manufacturers! )

Ok, so the main ingredients is tap water.  Tap water will be about 75% of this recipe. The next biggest ingredient is  glycerine according to the website, but on older packaging it was a synthetic, Cyclopentasiloxane. Glycerine is a humetant, its a good thing to have. It’s used at about 3-5% concentration or will make a recipe so sticky.  So know you know approx 80% of the recipe. Glycerine is cheap. Water is basically free.

What else is in that?  Next up are Dimethicone, Isopropyl Isostearate, Dipropylene Glycol – ouch, I would have to google those as I’m not a chemist or chemical engineer.  I don’t use them so have no idea.

Boy, there are hundreds of thousands of chemicals out there, I don’ know many. I focus on the natural things, that come from plants. So I would have to google each and every weird sounding name too.

And then you get to something nice – Squalane. It’s 6th in the list.  It’s the first expensive item. Then another two synthetics before you get Vitamin E and HA. Ok so you get the idea. A largely synthetic base with bits of naturals and nice added. You can also see petroleum listed.

Why is it pink?

What I’m most interested in, is how they’ve made it pink.  Is it a dye?  (Nothing leaps out in the listing) That pink colour is added through, I’m not sure. Pink clay would do it, also certain herbal extracts but I don’t see those listed. Centella asiatica herb doesn’t give a pink hue when extracted, it’s brown. Any ideas? 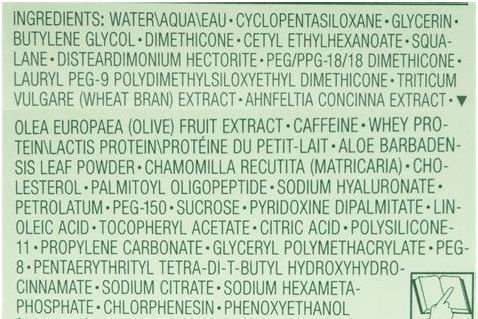 As for reformulating,  it’s not always a bad thing. Often an ingredient is no longer available.

A customer wrote: ” I’ve used the old Moisture Surge Intense for years but the new version seems to have caused me to break out when I don’t usually suffer with spots. The texture us slightly lighter than the old version, it does make your skin feel soft and plump but I sadly can’t use it so will have to look for another moisturizer.”

Another thing to remember is that our skin changes, not just with age, but also according to the seasons and how stressed we are.  What you eat, how much sleep and fresh air you get, whether your gut is digesting and absorbing sufficiently. So many factors.

If you enjoyed this, and want another products analysed, email me. Also sign up to my newsletter. I share lots of ideas and tips.