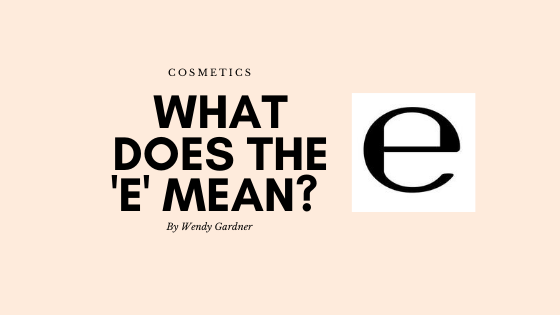 You see the weird e-symbol everywhere. It crept in and nobody explained why it’s there and what it actually means..

This quick article will clear up any confusion…

What is the e symbol?

The e symbol is also known as the Estimated sign or e-mark.

The estimated sign, ℮, also referred to as the e-mark or quantité estimée can be found on some prepacked products in Europe. Its use indicates that the prepackage fulfils European Union Directive 76/211/EEC, which specifies the maximum permitted tolerances in package content.

Why do we need the e symbol?

To understand why the e-symbol is on food and cosmetics, we need to go back in time to the Olden Days. (Before the invention of pre-packed foods).

When you needed flour, tea or sugar, you’d get in line at a grocers. You’d ask for a certain amount (money or weight) and he’d scoop from a big sack or jar, onto a scale.  You stood by as your goods were wrapped.

Now flour comes ready packed in kilo bags but if you buy a hunk of cheese at a deli, you’ll see it sliced, weighed and wrapped. Many fruits and veg are still sold by the kilo (or pound).  A labelling machine will print off your price tag.

Most Cosmetics and beauty products are factory filled by computerised machinery. You won’t see your jar being filled. Or labelled. Or boxed.  Unless you were on a VIP factory tour. Of course you still want to know that your jar contains the correct amount, advertised on the label.

It assures you that your jar has been filled to the nominal amount on the label.

(Nominal means.. the intended amount, be it in ml or g)

The e symbol and average fill

The e symbol on the container means it’s been filled according to the “average fill system”.
In large factories, filling machines are set to add a certain amount into your jar.
And smaller makers, indies and artisans will use a scale and weigh each container

So a 50g cosmetic or ebauty product advertised as containing 50g, will, on average contain 50g within that batch.
And will have a label with the e symbol of 50g applied.

The EU allows a slight variance, or margin of error.
This means that occasionally you might get slightly more, or less than the label says.
But, on average consumers will get what’s advertised on the label.

This is why it’s called the ‘average fill system’.

So it’s important to keep your scales accurate and away from heat or vibrations.

The e -sign on a food label indicates that the volume or weight of the product is an average value. Packaging machines in the food industry are not completely accurate; there will always be a margin of inaccuracy. Also, many products are not homogeneous, but contain lumps, pieces of fruits etc, which means that the same volume may have a different weight.

For a producer to be sure that, for example, a package of 1 litre orange juice contains indeed at least 1 litre, the filling machine should be set at 1020 ml, or a margin of 2%. This, however, would cost the producer a lot of extra juice that are not paid. It would be better for the producer if the average of all packages is 1000 ml.

The e -sign on the label indicates the legally accepted average and margins for the product.

The e -sign has nothing to do with E-numbers or additives !

And that’s all you need to know about the e-mark.