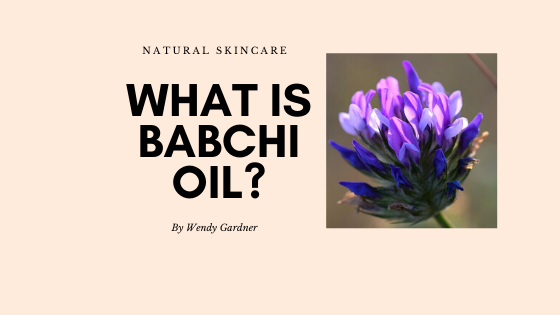 Bakuchiol is a hot and trendy natural skin care ingredient for those looking for safe alternatives to retinol.

But is it the same as Babchi Oil? Find out!

What is Babchi Oil?

Babchi is a smallish plant that grows in warm climates like Sri Lanka, India and China.

After the beautiful purple flowers are pollinated, a fruit forms.

Inside the fruit is a single precious seed. 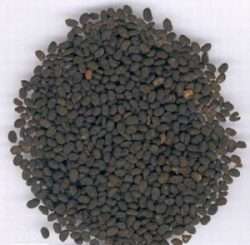 These black seeds are then cold-pressed to release the oil and preserve nutrients.

Babchi oil is a dark to reddy-brown colour, with a strong nutty scent.

This dark oil is the complete, original Babchi Seed Oil of  Ayuverdic fame. 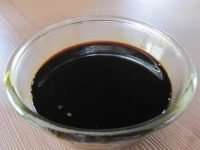 Benefits of Babchi Oil – what is it used for?

Ayurveda  and Traditional Chinese Medicine (TCM)  have used Babchi for thousands of years for many ailments.  Not just skin!

Babchi has been used for skin complaints, purifying the bood and strengthening immunity and teeth.

All parts of the plant have been used – leaves, and seeds.

It’s use in treating vitilgo gives a clue to how it can even out skin tone when used in beauty products.

You can even restore your hair’s natural colour and lustre with Babchi oil and head massage.

If you see a massage therapist, you could take your bottle of Babchi oil to have a few drops included with your scalp massage.

Babchi has also been used in wound care, for instance after burns or scalds.

After that, apply lavender essential oil diluted into aloe vera gel.   And a few days later you can apply Babchi oil diluted into a simple carrier such as coconut, sunflower, sesame or almond with a few drops of omega rich rosehip, tamanu, marula, cacacy, avocado or argan oil.

If you’d like to add essential oils, to every 30ml of carrier oils you can add a total of 6-10 drops of essential oil.  Useful oils are : lavender, helichrysum, blue tansy and chamomile, with lavender being the most affordable.

Babchi slowly reduces the size of the white patches, from the outer edges towards the centre as pigment production is restarte.

Vitiligo leads to a loss of self confidence.

The new pigmnent then diffuses into the paler skin surface, restoring normal colour.

How to pronounce vitiligo:  https://dictionary.cambridge.org/us/pronunciation/english/vitiligo

Bakuchiol is an extract from the mothership, Babchi Oil.

Within the complete and complex Babchi oil are many chemical components, one of which is Bakuchiol. (see diagram below)

The Bakuchiol part is isolated, extracted and bottled to sell to beauty companies who will use it in formulations.

Here are some other components within Babchi Oil: Why would you not use complete Babchi Oil?

As an aromatherapist, I seek out complete plant extracts to use for therapy and skincare.

Other components have an effect too eg psoralen which helps in re-pigmentation of skin in vitiligo and also helps in managing psoriasis and eczema.

The essential oils I use are whole and complete not isolated extract like Standardized Lavender used in perfumery etc.

Plants chemcial components change from year to year due to weather, stress, pollution etc.  But this causes issues with Big Corps who want standardized, predictable scents in their products.

So, is bakuchiol safe?

Generally, bakuchiol is safe for all skin types. it’s a natural plant based alternative to retinol.

How does Retinol  work?

Now, Babchi oil and retinol are similar in that they both are excellent in anti-aging skincare.

Both retinol and bakuchiol show effects on photoaging in clinical tests when used in a 0.5% dilution.

A study published in the British Journal of Dermatology compared  Bakuchiol (used twice daily) with retinol (used nightly) in 50 women with photo-ageing in their late 40s.

Both retinol and Bakuchiol stimulated key retinoid-binding genes and collagen production so improved wrinkles and hyperpigmentation to a similiar degree..

However retinol users experienced more stinging and scaling than those who used Bakuchiol.

Another key difference is that Bachi is photostable, while conventional Retinol is not.

What this means is that retinol can only be used at night.

Here at Glow we’ve been using Babchi in our Bespoke products for over 4 years. If you would like a custom blend or bespoke product made for you, please get in touch with [email protected]

Bakuchiol benefits for skin and wrinkles

It increases skin firmness so is helpful during menopause when jowls etc start sagiing.

Like retinol, bakuchiol tells your cells to make collagen, “plumping” your skin and reducing the look of lines and wrinkles.

A study has found  ‘bakuchiol’ can reduce the severity of wrinkles by 20 per cent after three months. Wow.

Unlike retinol, Babchi oil has a hydrating effect on the skin  (Retinol causes dry patches and sensitivity.)

This makes it suitable for all skin types

Bakuchiol evens skin tone so reduces the appearance of dark spots or areas of hyperpigmentation.

This balancing property of Babchi  on skin’s pigments is what helps people with vitilgo.

Yes, Dermatologists love Bakuchiol, becasue it isn’t as drying or irritating as retinol.

“It stimulates collagen and elastin synthesis. Prolonged use has shown to decrease roughness and dryness.” It’s also versatile—Jaliman recommends bakuchiol to clients with all skin types.

A double-blind study reported in the British Journal of Dermatology assigned one trial group bakuchiol and another group retinol. After 12 weeks of application, both the bakuchiol and the retinol group’s skin showed a “significant” but equal decrease in wrinkles and hyperpigmentation. But the retinol users “reported more facial skin scaling and stinging.” In general skin irritation, or even burning, is one of the major possible drawbacks of retinol, especially if you have dermatological conditions like rosacea and eczema.

Babchi can irritate the skin and can cause burns and blisters. It needs to be diluted to 0.5% of a formula to be safe

Babchi Oil can cause Hepatitis, hyperacidity and gastritis in high dose and prolonged usage.

Myth – Babchi is a true essential oil. No, this is incorrect.  Babchi is extracted by cold pressing directly from the seed which preserves the nutrients and antioxidants. True essential oisl are  produced by distillation (which involves steam) or CO2 extraction. Babchi seeds are cold pressed – this is the same extraction method used to extract sunflower, coconut, baobab, marula, argan etc. These are not essential oils as they are not volatile. Lavender oil is an essential oil, as is rose and neroli. A true essential oil evaporates when a drop placed on a  tissue whereas babchi leaves a greasy brown stain.. this is a sure sign it is pressed from a seed not extracted through distillation.

Myth- It is completely safe to use in any amount. No, it does irritate the skin and can cause burns and blisters. It needs to be diluted to 0.5% of a formula to be safe and should not be used by pregnant or lactating women. Babchi does stimulate collagen production and improve skin defences against oxidative stress. In diluted amounts it is safe as a retinol alternative for sensitive skin. Bequite strong and may lead to blister formation in sensitive individuals. Bakuchi Oil has an irritant effect on skin and mucus membrane.

Myth- Babchi is a ‘new’ discovery. No its been used for thousands of years in the East in Ayurvedic and Traditional Chinese traditional medicine where it’s been used for various diseases like leucoderma, genital health, bone disorders, leprosy, lumbago, impotence, intestinal worms, lower back aches and many skin conditions such as psoriasis, eczema, dermatitis, skin eruptions, boils, leucoderma, scabies, vitiligo and ringworm. It’s named ‘Kustanashini’ the leprosy destroyer. Babchi (Bu gu zhi) is used in TCM for tonifying kidney yang and essence.

Studies have  been done on :

Some of the most common herbal products used for vitiligo treatments, and their main components

Babchi is said to alleviate kapha and vata doshas but aggravate the pitta dosha.

Other Sanskrit names include:

The most commonly prescribed Chinese herbs for vitiligo

Examples of TCM for vitiligo treatments